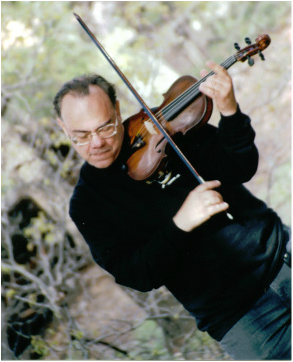 Allen Ames grew up in Phoenix, began playing the violin at age nine, and has studied with Wayne Clark, Max Mandel, William Majors, Frank Spinoza, Theodora McMillan and James Buswell.  He studied composition with Janne Irvine and James DeMars, and has been featured in the N.E.A’s Composers in Concert series co-sponsered by the Arizona Composers Forum.   He is a member of ASCAP.

He was apprenticed to the late Carl E. Reiter in 1980 as a violin maker and is listed in Wenburg’s Violinmakers of the United States.  In 1995 he developed the Violira: a six-string, five octave instrument spanning the ranges of the violin, viola, and cello.

Allen has played with orchestras and chamber ensembles including the Arizona Opera and Ballet Orchestras, Nouveau West and La Forza Chamber Orchestras, the Phoenix, Amabile and Philharmonic String Quartets, the TOS Performing Arts Ensemble, and many others. He has also played baroque violin with the Camerata Sonora, Solis Camerata, and the Phoenix Bach Choir.

Allen has played jazz since high school days, adding guitar, bass, and drums to his stable of instruments, and has performed with many iconic Phoenix jazz artists over the years.  More recently he has been specializing in Gypsy swing.

Allen has taught many music appreciation courses and given pre-concert lectures for the Phoenix Symphony and the Sedona Chamber Music Festival.  As a published poet, he has given many performances combining music and poetry.

In 2007, he was included in Who’s Who in America.
​
Proudly powered by Weebly